A History of Perth Highland Games

The earliest records of Highland Games in Perth reveal an event that attracted 10,200 people, held in Muirton Park on Saturday 25th July 1925. At that time Muirton Park was the home of St Johnstone Football Club, located on what is now the site of Perth’s Asda supermarket.

“Billed as a “Highland Games and Sports Carnival”, with musical entertainment provided by the Perth Trades Band, the 1925 Games had an admission price of one shilling”

The programme for the day included athletics, cycling, heavyweight and highland dancing competitions along with a 5-a-side football tournament. The prize money must have been very attractive to competitors – £10 was on offer to the winner of the 100 yard sprint; that’s the equivalent spending power of nearly £300 today.

Competitors came from far and wide, including Pat Davies, a South African champion sprinter. The star feature of the afternoon was the cycle championship in which J Cunningham from New Gilston ‘kept the crowd entertained with some very fine performances and in particular in the nine mile championship event when the crowd cheered to the finish’.

St Johnstone FC fielded two teams in the 5-a-side competition but failed to secure the premier honours. The Saints first team of Ellis, Lackie, Pender, McClure and Ferguson lost to Celtic, while the second team of Hart, Swallow, Kelly, Fleming and Thomson succeeded in reaching the semi-final but lost to Raith Rovers, who went on to win the competition by beating Rangers 2-1. 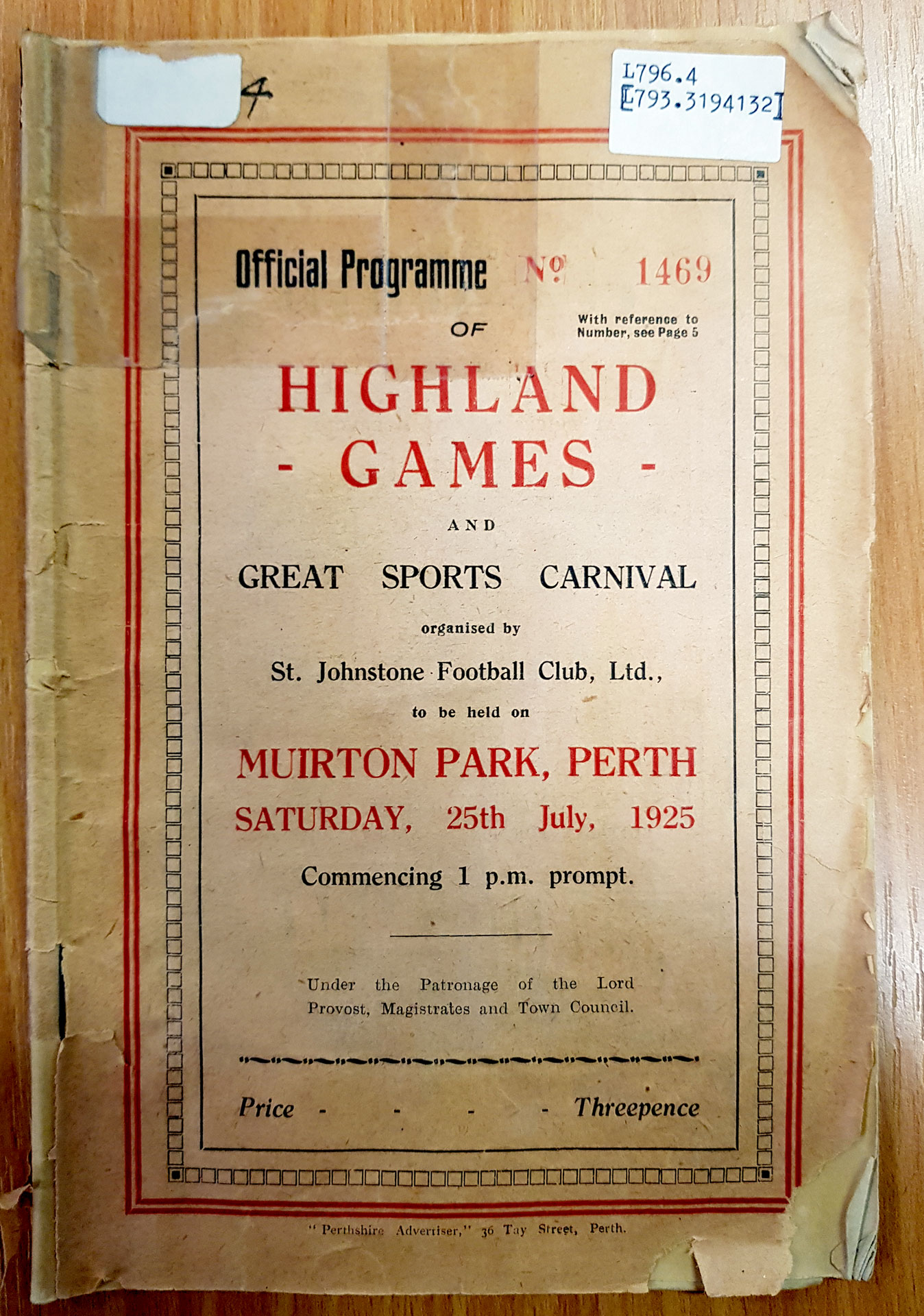 Image above courtesy of Perth Library

The Games were held again in 1933 but they were held on the same day as Crieff Highland Games and Crieff won the battle for the crowds. The Games were not to feature in Perth again until 1977 when the Perth Highland Games Association, in conjunction with the Junior Chamber, arranged for the Games to be set up again. Ewan Cameron from Lochearnhead was the first Chieftain of the modern era.

From 1977 to 1999 they were held in the South Inch public park but they had to relocate to the grounds of Scone Palace in 2000 and 2001 due to the construction of major flood prevention works along the Tay in Perth. They returned to the South Inch in 2003 but heavy rain caused major problems – in 2007 the Games had to be cancelled at short notice and in 2008 they had to be transferred to Perth Racecourse. In 2012 the Games moved to the North Inch, and in 2018 relocated to their current location at Scone Palace parklands.

Attracting average crowds of over 5000 every year, the Perth Games provide a great day’s entertainment with a full range of traditional events, including cycling, track events, highland dancing, pipe band and heavyweight competitions. In recent years the Perth Games has hosted major national and international championships for pipe bands, cycling and tug-of-war. In 2013 the Games was part of Perth’s ‘Big Weekend’ of community events celebrating life in the Fair City. The weekend included the Kilt Run, which saw over 1300 kilted participants taking part in a record-breaking fun run around the City. Perth Highland Games was then held on North Inch on the Sunday, rounding off a great weekend in the Fair City. 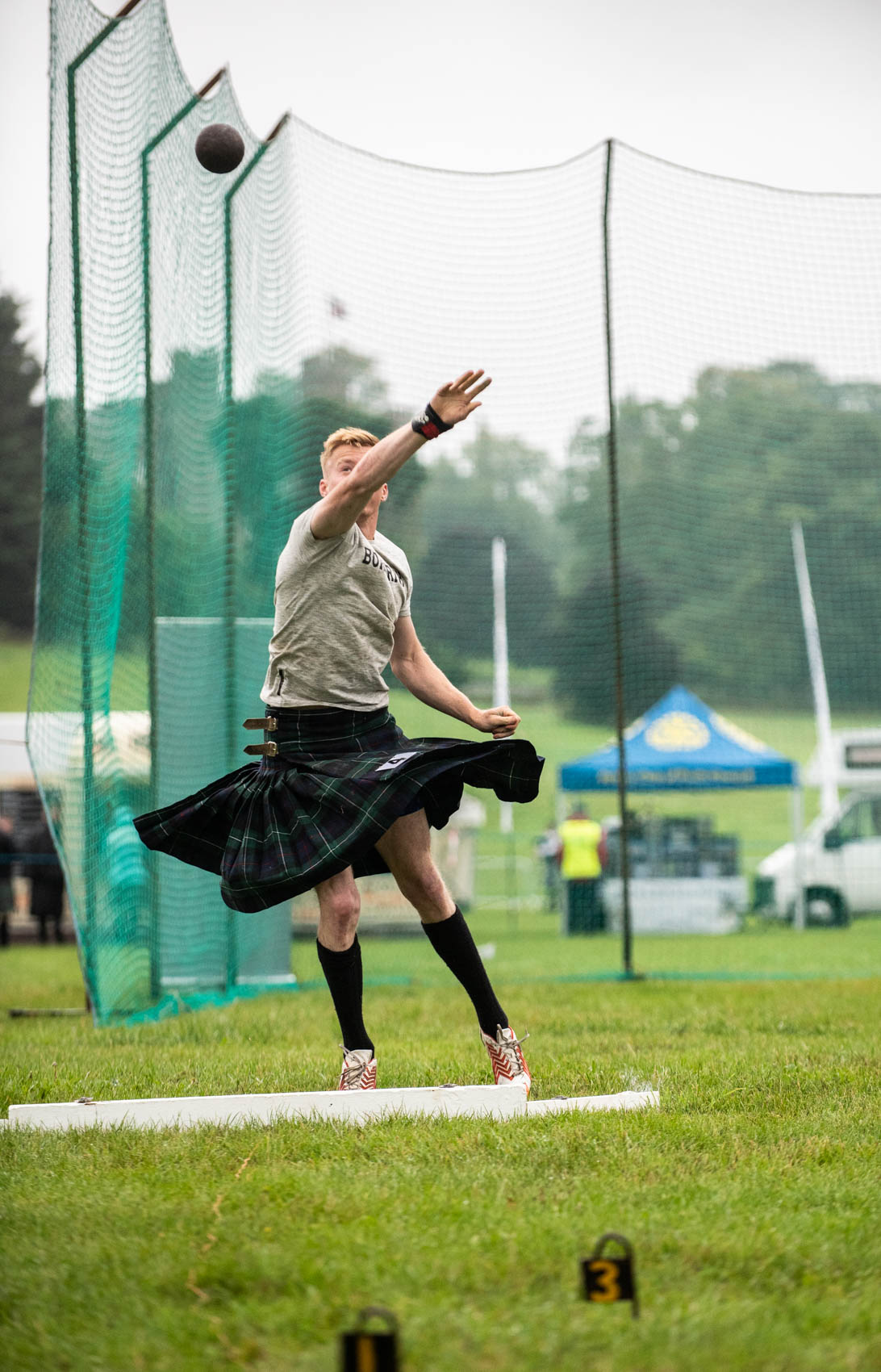 The next record of a Highland Games held in Perth is for Saturday 13th August 1932 at the South Inch (a public park on the Edinburgh Road, by the River Tay). A crowd of 6000 spectators enjoyed a bright and sunny day with a full programme of different sports.

Reports say that the most outstanding events were the cycling races in which R Morrison of Glamis kept the crowd on their feet cheering. Heavily handicapped in each race, he ‘thrilled the crowd with his astonishing burst of speed at the post’.

A display of gymnastics and physical culture was given by members of the Perth Workers Sports Club and the Games’ Chieftain for the day was Lord Scone. Admission to the ground was one shilling; to the enclosure sixpence, to the centre stand two shillings and parking for motor cars cost one shilling. 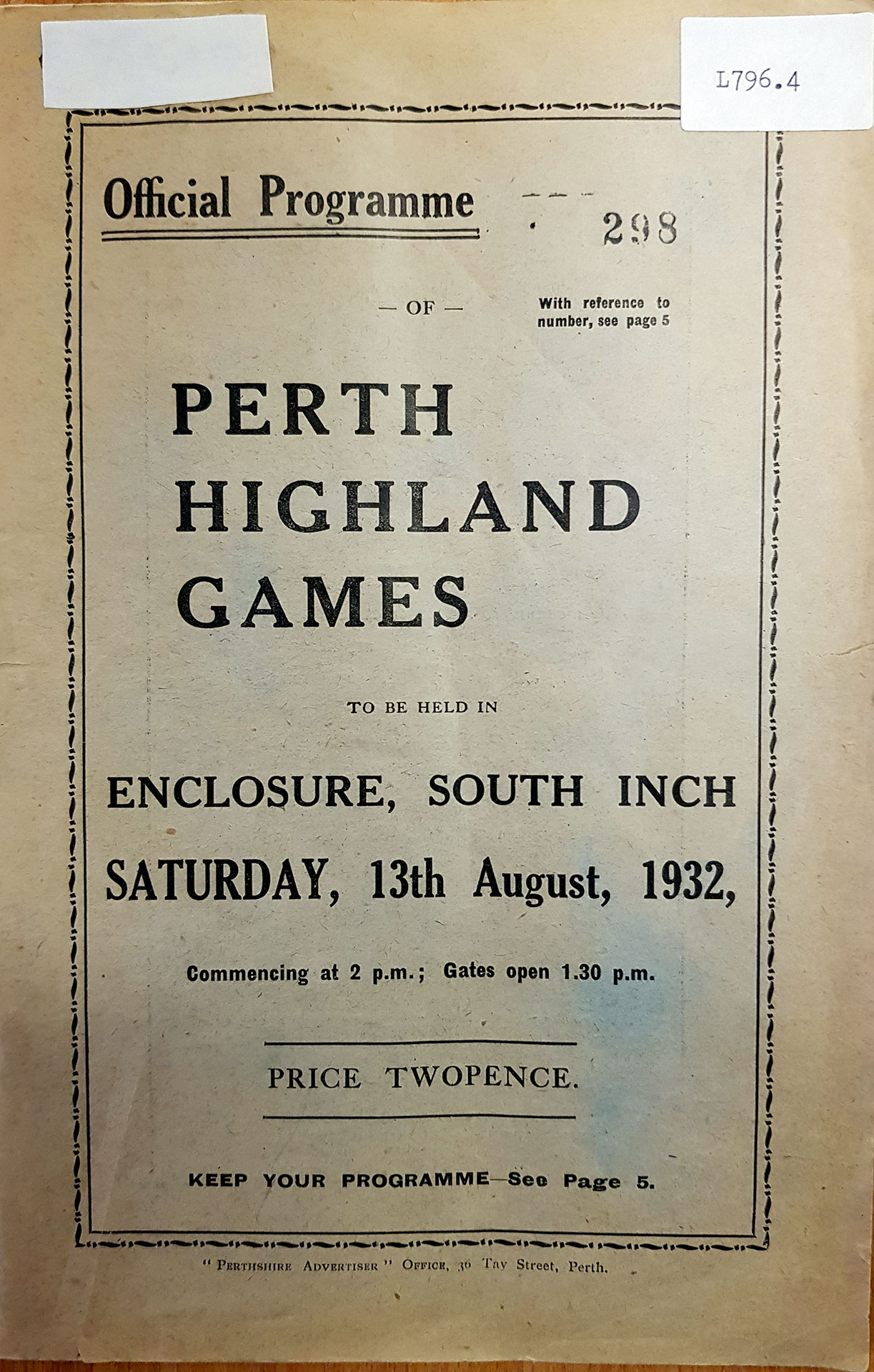 Image above courtesy of Perth Library 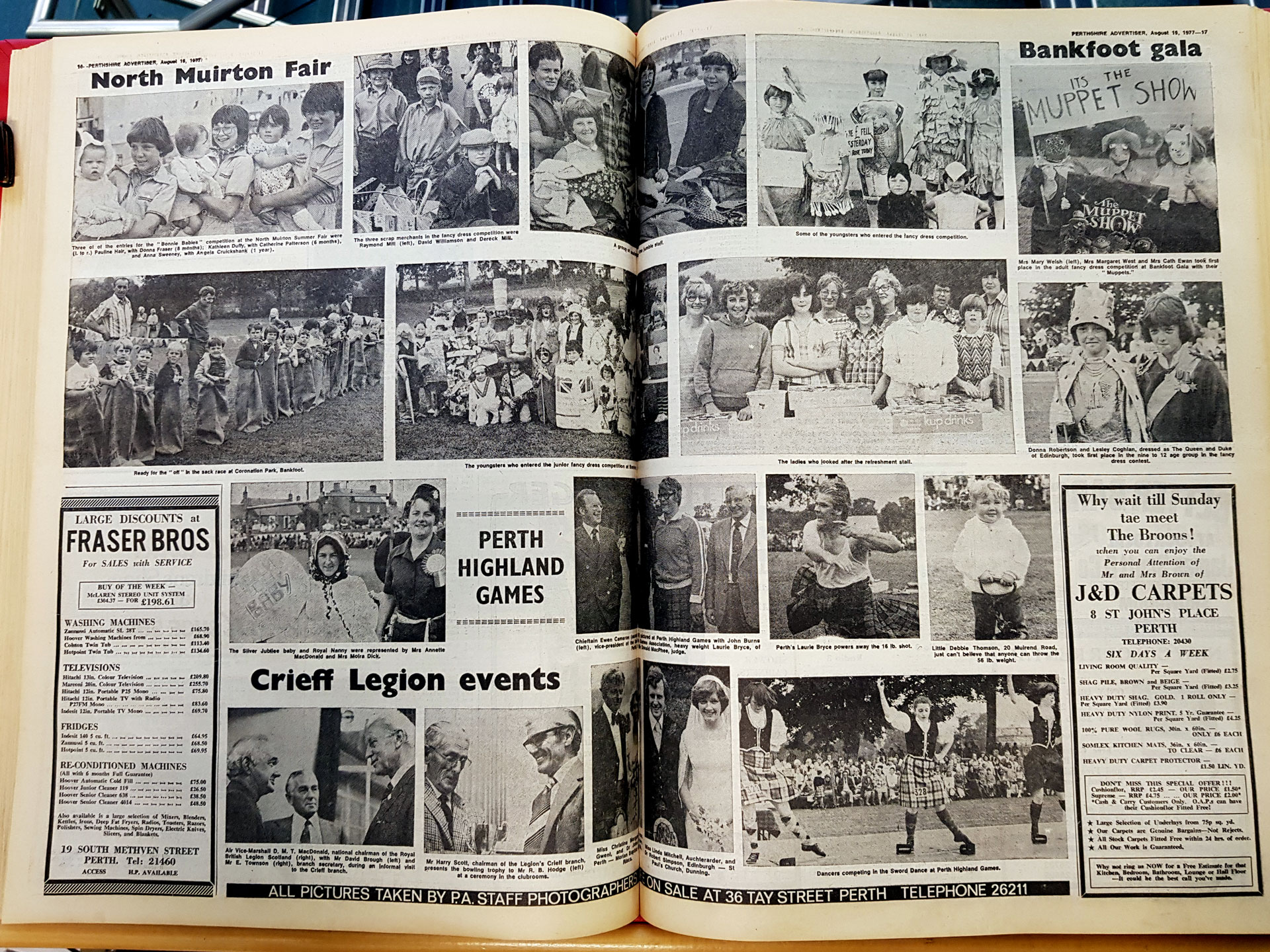 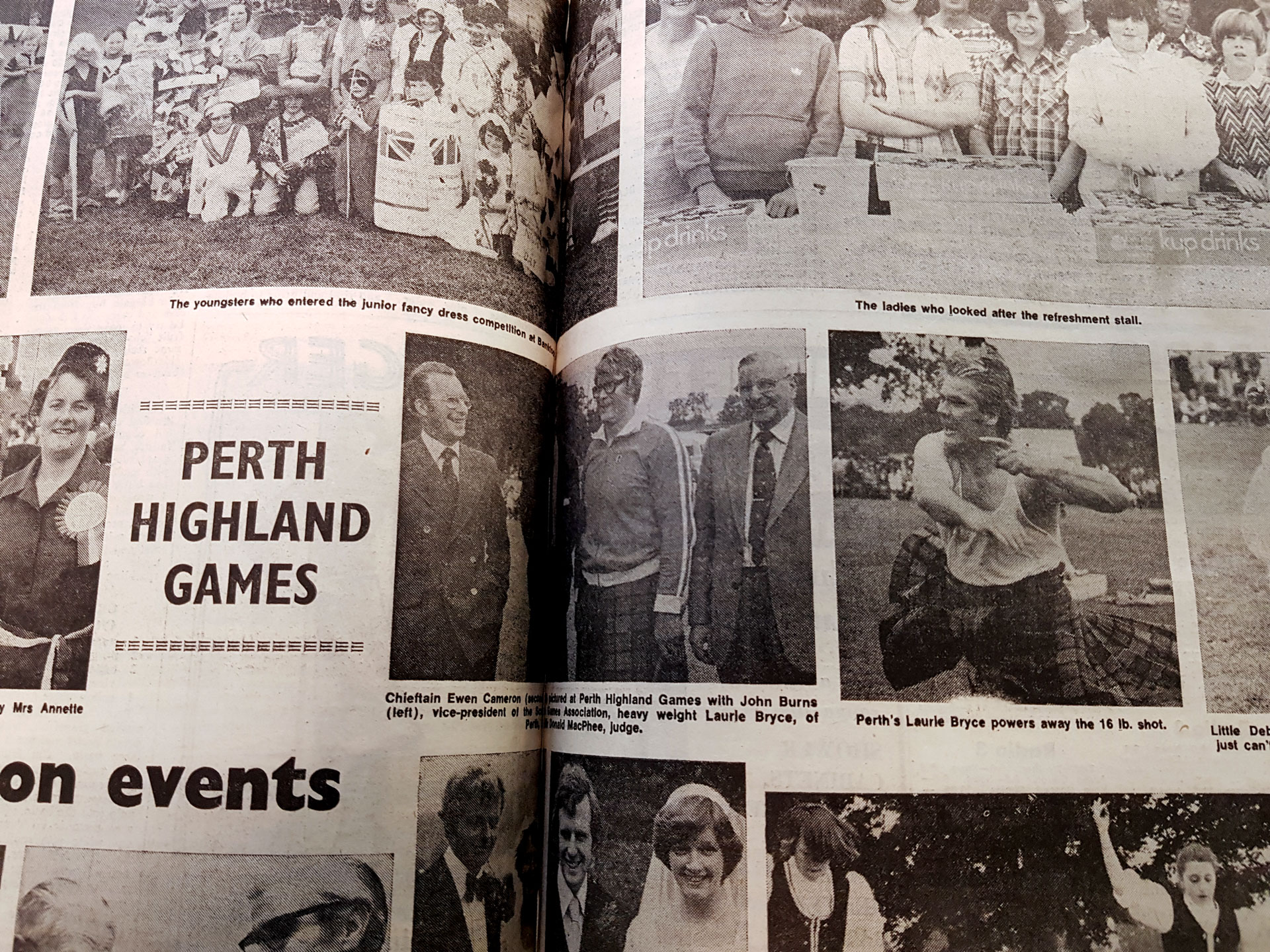 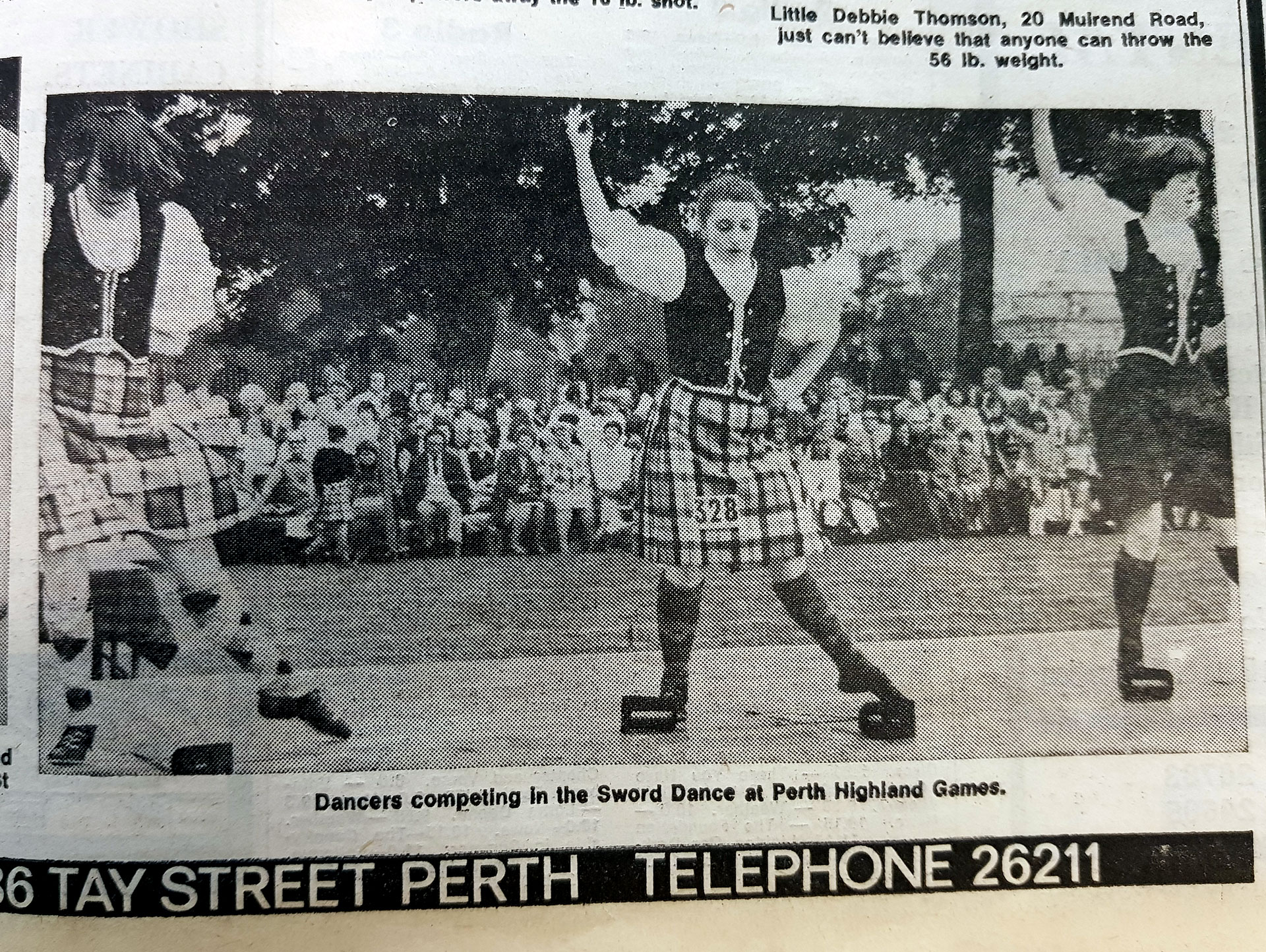 Images above courtesy of the Perthshire Advertiser and Perth Library